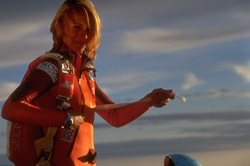 Viviane started her skydiving life with her first jump 1992 in South Africa. From there she changed her life completely. She had found her calling in skydiving. As an active Volleyball competitor, Snowboarder and Skier she was used to a sporty lifestyle, but to go on with her newfound passion in skydiving, she left her job in Switzerland and moved to Spain to a professional Skydive center. Jumping out of airplanes was her new life.

By now Viviane has over 6000 jumps and is an international respected female top athlete. Holder of three World championship titles, and first female athlete to ever medal in the ESPN X-Games to date. Viviane was representing the first time skydiving in the well esteemed Women’s Sport Foundation NY, where she received the 1998 Reebok Give Back Award, for her outstanding representation as a role model in this sport.

As the youngest athlete, Viviane entered the Sector No Limits Team and 1999 she realized the “Perfect Surf “. The combination of skysurfing and snowboarding, here creation of a new sport. This project was a personal goal and turning point in here sports career.

Viviane decided to retire completely from competing to take more time for herself and here creativity. As a member of the No Limits Team she was representing here sponsor at a North Pole expedition. The same year she created a Skydive boogie in the Swiss Alps ” Engadinsky” which established itself as an annual event.

More event organising has followed, like the Air show at the FIS alpine World Championships in St. Moritz. The globetrotter lifestyle of Viviane became to settle down and Viviane changes here parachute for a kite equipment and traveled around the globe to find the best spots and conditions the learn to fly with a kite.

2005 Viviane moved to Venezuela where the new Drop Zone “Skydivevenezuela” has been created, offering  a huge playground to combine Skydiving and Kitesurfing in the tropical heat of the Caribbean.

By now, Viviane and here Family are based in Spain, close to here home Drop Zone, SkydiveEmpuriabrava, where some new creative projects are waiting to happen… 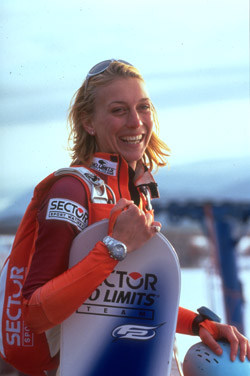