Be lifted up into the air; leave your worries on the ground

Come down with this freedom – touch the snow, enjoy the mountains

Surf down to earth, get in contact with the base, glide the waves of sand

Go further where you touch the water, the element where life comes from.

I have travelled for a long time in my life and have seen locations and spots, which are perfect to be surfed. The beaches around the continents, lakes over the world, mountains and snow-covered volcanoes create a huge playground. I use the surfboard as the medium to be in contact with al those major elements. Present a challenging way to bring all these dimensions together into on move.

This is the Perfect Surf

Jump out of an airplane, surf the clouds of the sky, dive into space – land on a snow run, cut away the main canopy, surf untouched snow, play with the obstacles of the nature- keep on surfing to the bottom, where is no more snow, but dunes – glide down on these elegant waves of sand – feel the heat and cool down in the water – catch those waves, use the wind to create speed, take the speed and jump up in the air again.

Viviane realised her first step of the Perfect Surf in Chile, touching down on the crater of the volcano Villarica (2850 meters) cutting away here parachute and continue surfing down the snow-covered volcano. It was a magic moment for everyone involved in the project.
As a member of the Sector No Limits Team, Viviane got the financial and logistic support of a high experienced crew, to realise her project on a highly professional level. The fascinating images got commercialised through the international media channels of Sector No Limits and reached a large public awareness. 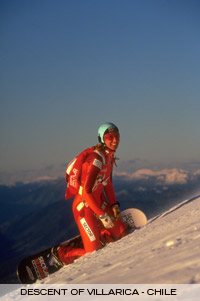 Bringing the “perfect surf ” into an other stage, creating a new picture of where and what can be surfed, where is no more snow there you come down onto the ground and find sand.

Viviane was scouting for the next location and surfed the highest sand dunes in the desert off the African Sahara, in Namibia and carved the tale of here surfboard on Strady Island in Australia, one off the most magic locations for dunes around the globe.

As the hole Sector No Limits Team broke up in 2001, this project never got commercialised as the landing on the volcano, but Viviane moved on to the next element, surfing the water. And after Viviane saw the breathtaking images of former No Limits Team partner Manu Bertin, kitesurfing big waves in Hawaii, she changes here parachute for a kite equipment and travelled around the globe to find the best spots and conditions the learn to fly with a kite.